COVID-19 INFORMATION
The Egyptian Museum in Cairo is situated on the northeast of the centrally located Tahrir Square. It is one of the largest museums in the world, and the first national museum in the Middle East. It is actually the fifth building to house Egyptian antiquities, and has had a long and illustrious history until today.
FOUNDATION HISTORY

Origins of the Egyptian Museum

The idea of a museum for Egyptian antiquities in Egypt goes back to Muhammad Ali Pasha, who was viceroy of Egypt from 1805 to 1848. Attempting to put an end to the export of antiquities, he issued a decree on the 15th of August 1835, which resulted in the first Egyptian museum for antiquities in Cairo. Housed in a building near El-Ezbekia Garden, the display was designed by Hakikan Effendi, and the collection was managed by Youssef Diaa Effendi. At the same time, Sheikh Rifa’a al-Tahtawi, who was responsible for the excavation and conservation of Egyptian monuments, also ordered that no further excavations be undertaken without his permission. He announced that the export of artefacts from Egypt was strictly forbidden, and that all finds were to be transported to the El-Ezbekia Museum.

In 1851, under the reign of Abbas I, the entire collection was transferred from El-Ezbekia to one of the halls within the Citadel of Salah El-Din (Saladin), where it was accessible only to private visitors. However, in 1854, most of the objects were offered to Austria’s heir to the throne, Archduke Maximilian, who had shown great interest in them during his visit to Egypt. They now represent a major part of the Egyptian collection in the Kunsthistorisches Museum in Vienna.

In 1858, the viceroy Said Pasha appointed the French Egyptologist Auguste Mariette as Director of a new museum in the Boulaq area of Cairo. Mariette had been sent on a mission to Egypt by the Louvre Museum and had quickly made important discoveries, including the catacombs of the Serapeum in Saqqara. This museum building had originally accommodated the Nile Navigation Company at the Boulaq Harbour, now located close to the State Television Building and the Ministry of Foreign Affairs.

In 1859, after the discovery of the funeral equipment of Queen Ahhotep at Dra’ Abu el-Naga in Thebes, the Pasha granted funds to enlarge the building. The formal inauguration of the Boulaq Museum took place on the 18th of October 1863, and was attended by Khedive Ismail. However, the museum quickly became too small to house all of the artefacts that continued to be added to the original collection, and by 1869 the building was enlarged once again. Disastrous Nile floods in 1878 resulted in serious damage to the museum and it remained closed to the public for repair, until its reopening in 1881. The possibility of future flooding, along with the 1881 discovery of the cache of royal mummies at Deir el-Bahari, made it apparent that the museum needed new quarters.

This same year also saw the passing of Mariette, who was succeeded by the French Egyptologist of Italian origins, Gaston Maspero, as Director of the Boulaq Museum and Department of Antiquities. By 1890, the overall size of the collection had increased beyond the Boulaq Museum’s ability to contain an ever-growing number of objects. In response to this, the entire collection was transferred to the Ismail Pasha Palace in Giza, located in the area of the present-day Giza Zoo.

Interiors of the Boulaq Museum 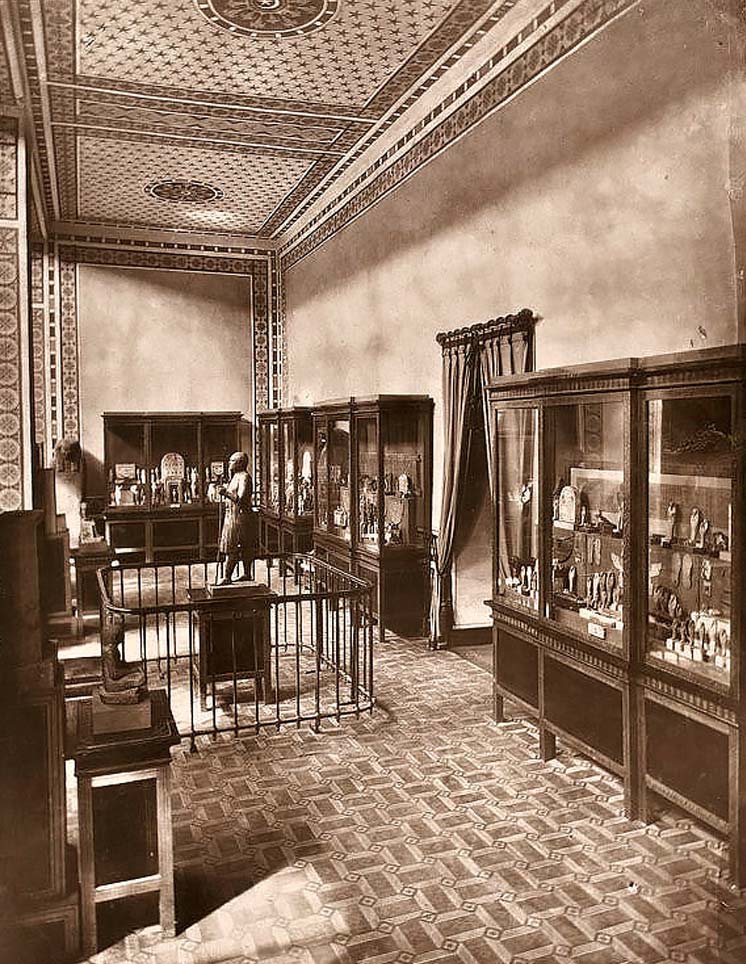 Unfortunately, the Ismail Pasha Palace was not adapted to function as a museum, especially for the exhibition of monumental sculptures. The need for a new museum became even more urgent when a cache of 21st Dynasty coffins and mummies of the priests and priestesses of Amun was discovered in Bab el-Gusus, at Deir el-Bahari, during the same year. The Ismail Pasha Palace was neither secure nor large enough to house the hundreds of objects regularly arriving from excavations. Furthermore, the palace lacked space for laboratories, a library, and administrative offices, which made it difficult to establish a well-functioning institution.

In March 1893, the Ministry of Public Works met to discuss whether to establish a new museum of antiquities, or simply keep the collections in the Ismail Pasha Palace, after making some renovations to the building. It was the new Director of the Antiquities Service, Jacques de Morgan (1892–1897), who urged the Egyptian Government to construct a new museum.

Between 1893 and 1895, shortly after the opening of the Ismail Pasha Palace Museum, an official committee of the Ministry of Public Works announced an international competition for the design of a new Egyptian Museum, granting a prize award of 1,000 Egyptian Pounds to the winner.

It was to be built in the city centre, in Ismailia Square (today’s Tahrir Square), between the Nile and the British barracks of Qasr el-Nil. Eighty-seven proposals for the new construction project were submitted, and finally the design for a Neo-Classical structure by the French architect Marcel Dourgnon was chosen.

The Marseille sculptor Ferdinand Faivre was commissioned to create the two large statues whcih flank the main door representing Upper and Lower Egypt. The cornerstone of the Egyptian Museum was laid on the 1st of April 1897, in the presence of Khedive Abbas Hilmy. On the 7th of May 1900, after three years of work, the first artefacts were placed in the showcases. Scientific supervision and the task of setting up the collection was entrusted to Gaston Maspero.

The new museum occupied an area of 15,000 square meters and cost about 240,000 Egyptian Pounds at the time. On the 15th of November 1902, the Egyptian daily newspaper Al Ahram announced the official opening of the Egyptian Museum. 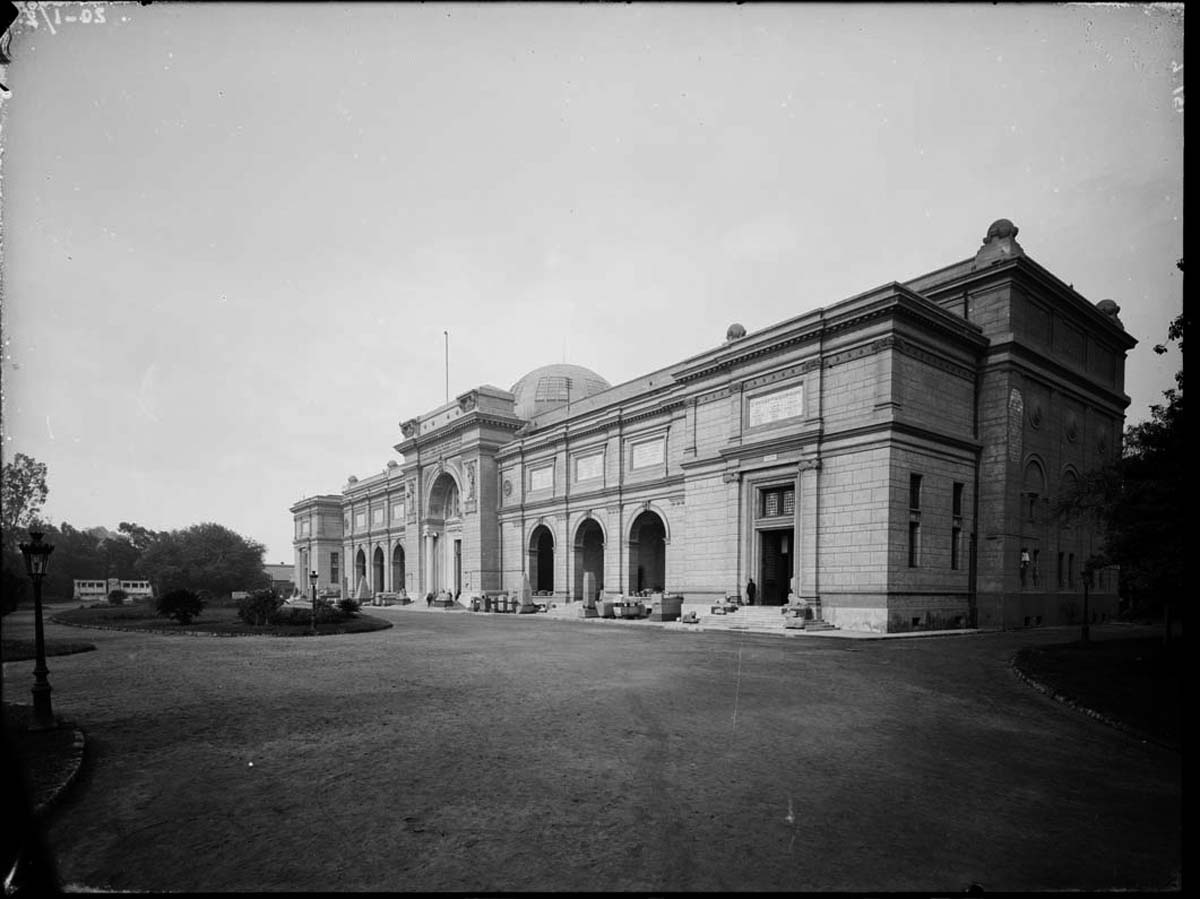 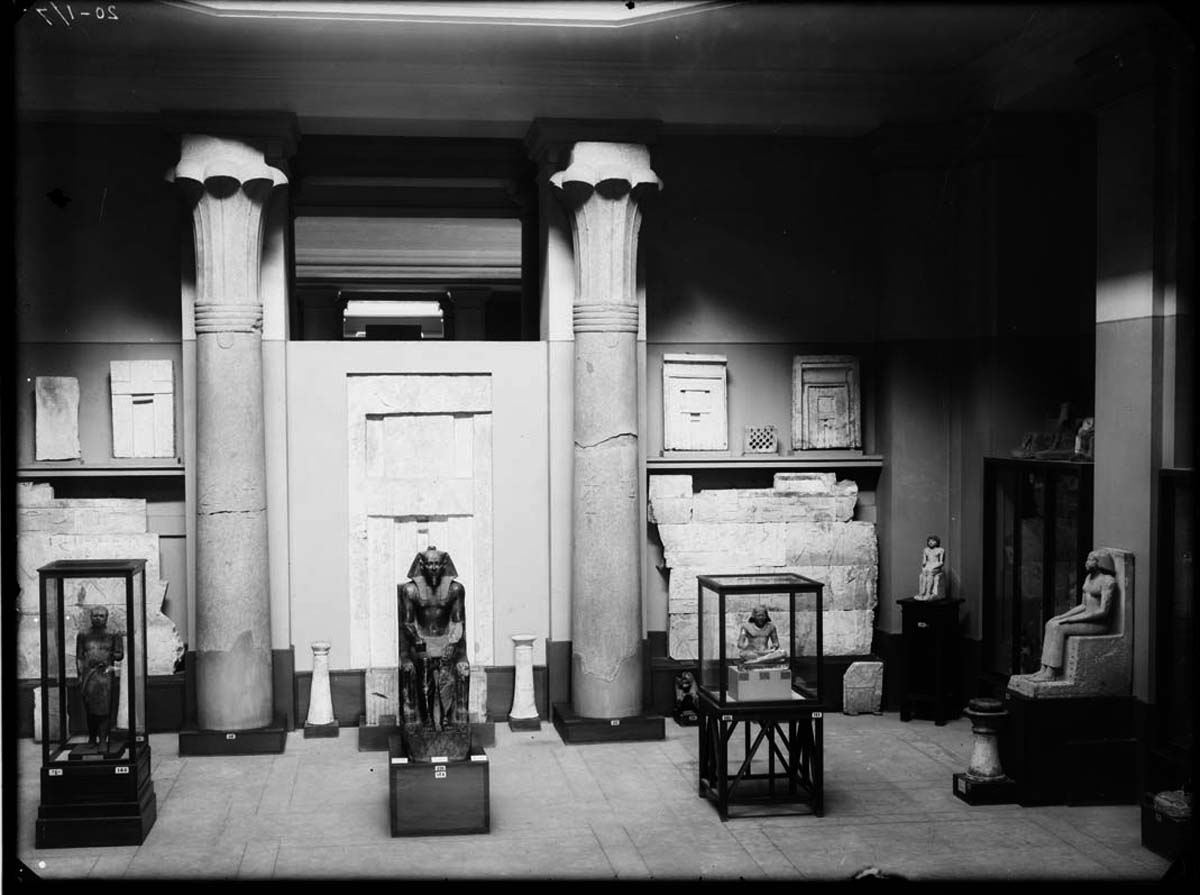 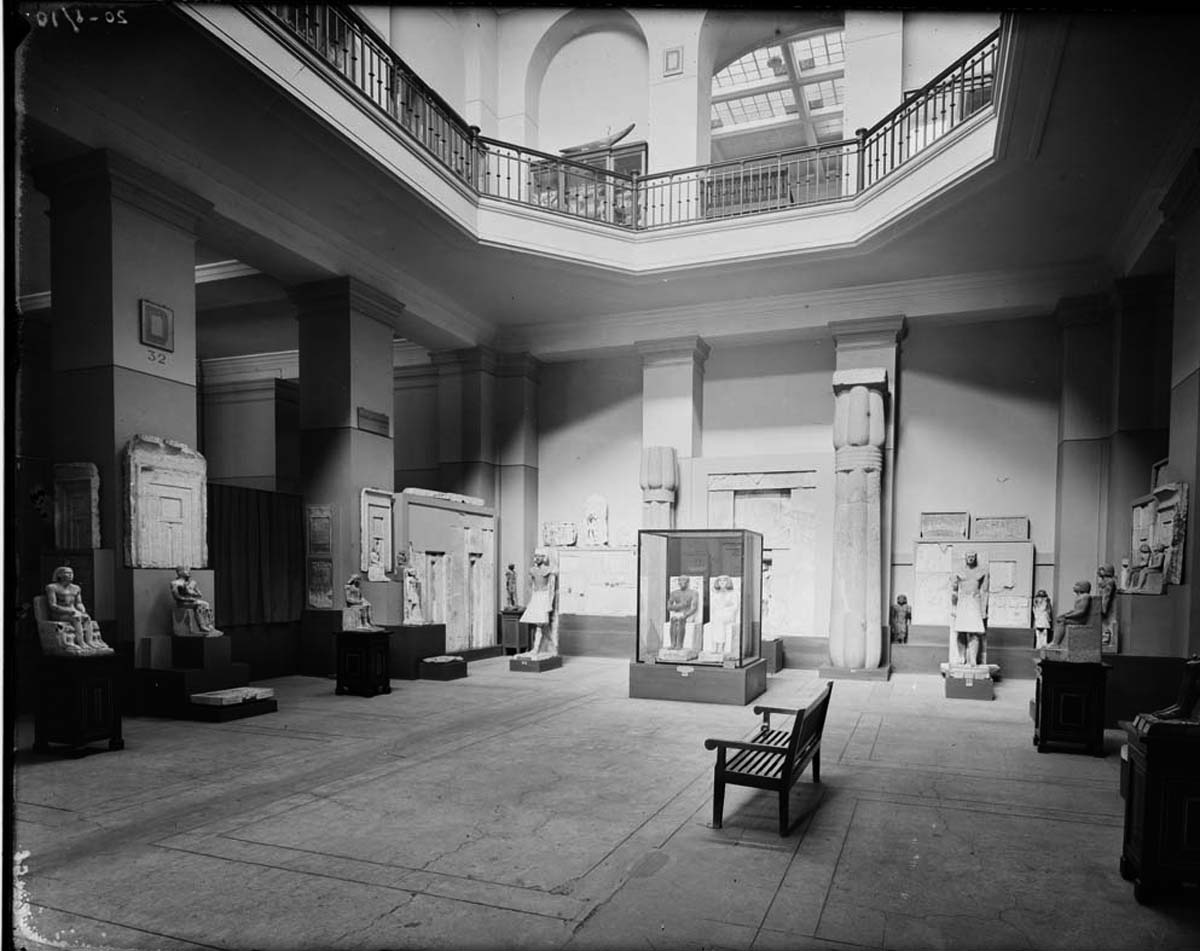 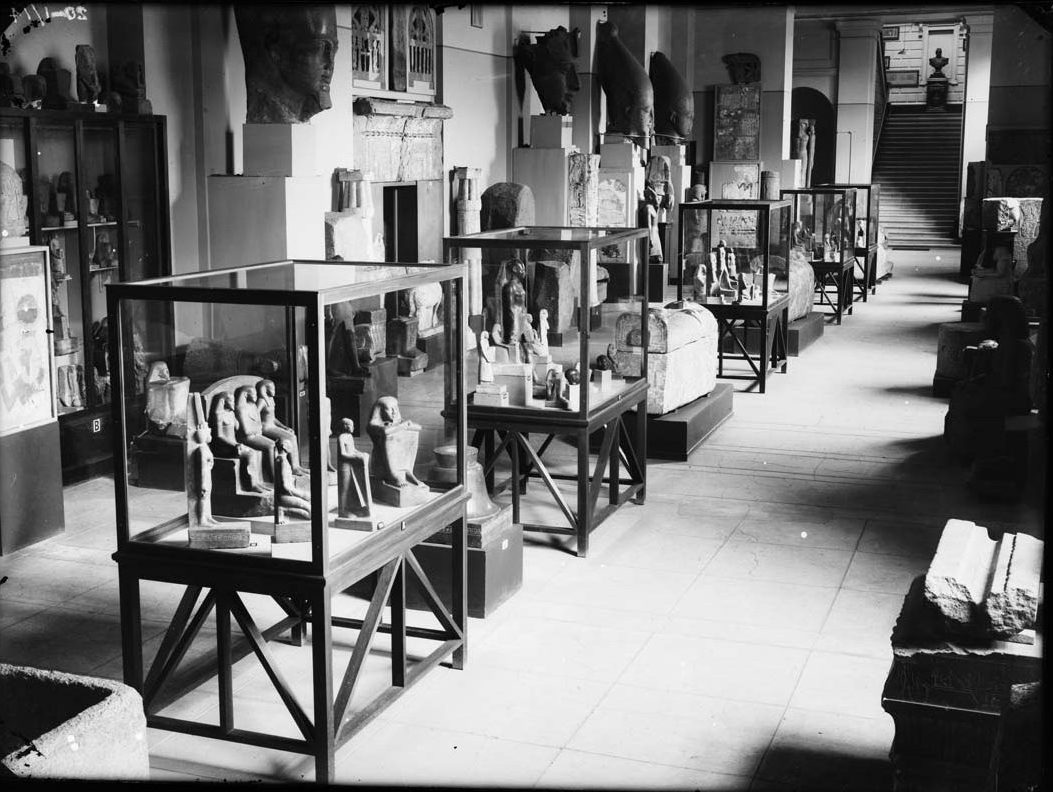 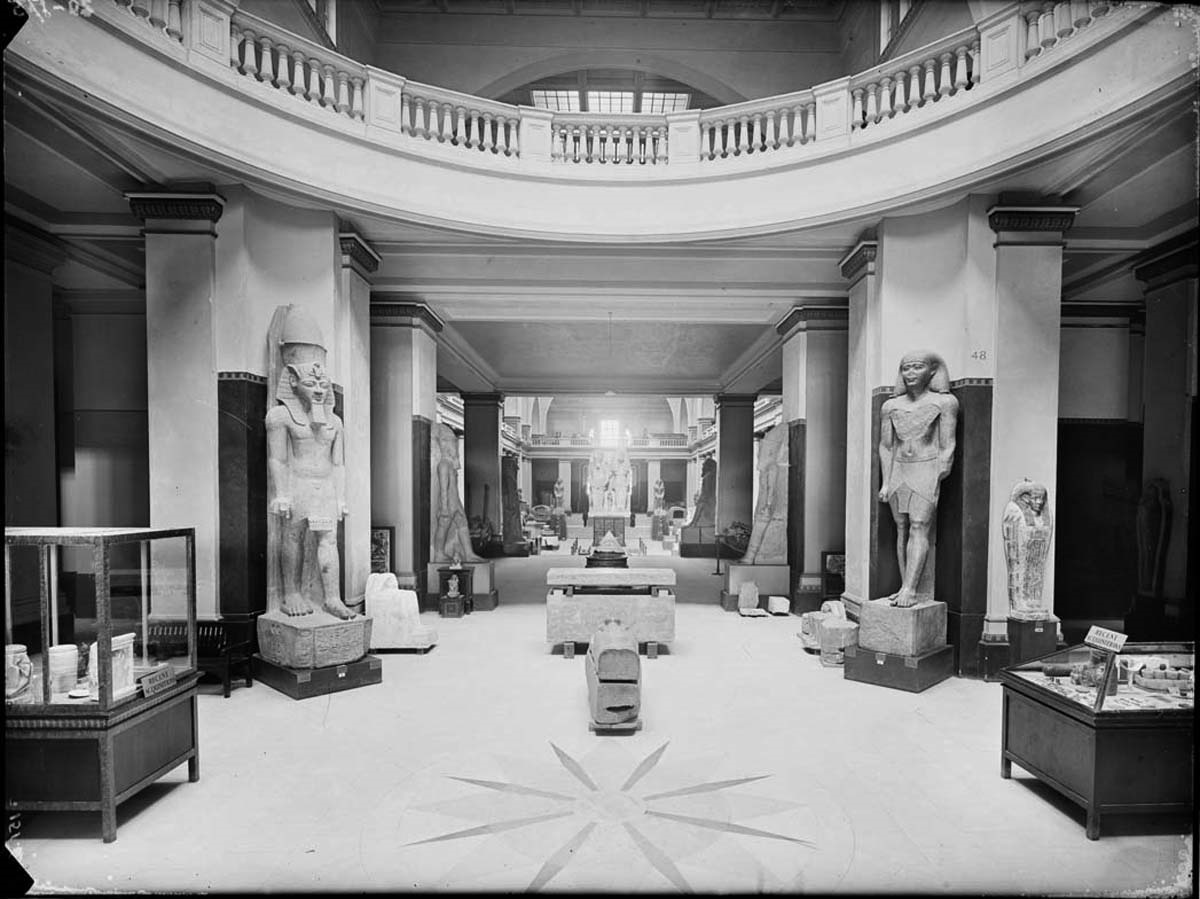 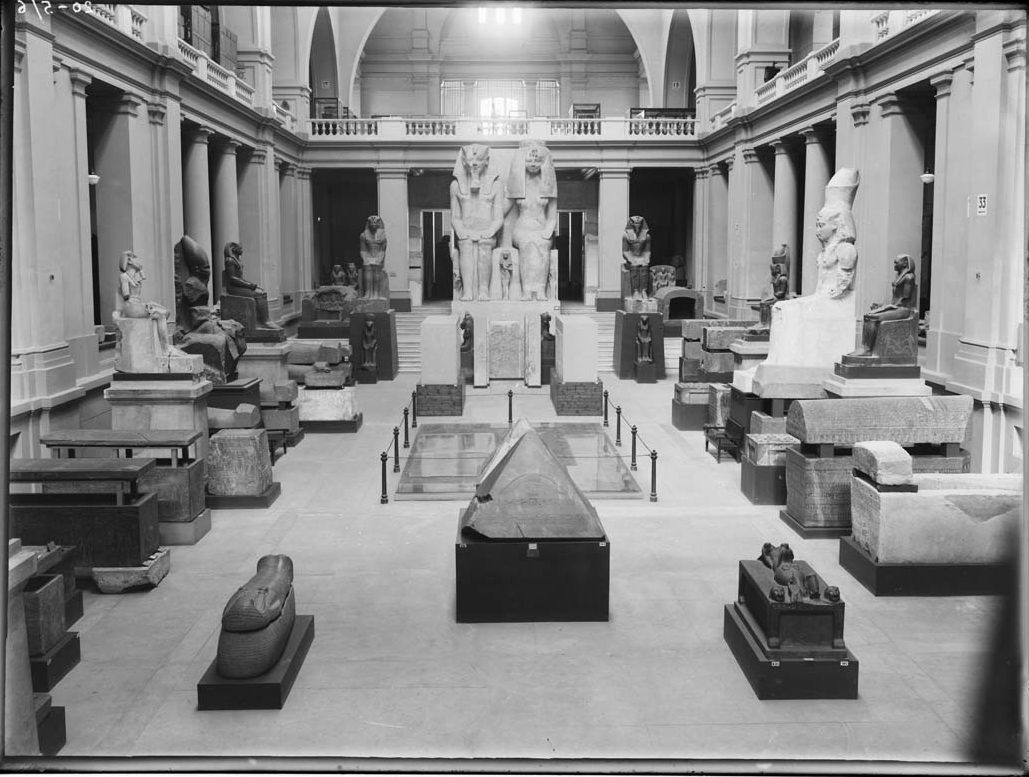