More than 5000 years of history

The people of the Nile valley began to coalesce in two main areas: the Delta region (Lower Egypt) and the south (Upper Egypt), at Hierakonopolis. From Hierakonopolis comes evidence of a number of kings such Narmer, the last king of the Predynastic Period: he conquered Lower Egypt and unified the country. Horus Aha, who probably took the name of Menes, succeeded Narmer and founded the First Dynasty: he established the capital at Memphis in order to ensure control over the country.
Dynasties: First, Second
Photo: Narmer Palette
ca 4000 - 2686 BC 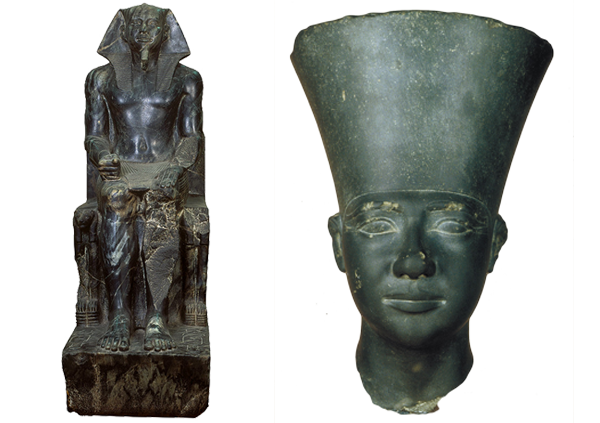 This is the period of the Great Pyramids. Djoser built the first pyramid in Egyptian history at Saqqara. Snefru, the founder of the 4th Dynasty, built the first true pyramids at Meidum and Dahshur, and Khufu the Great Pyramid at Giza. During the reign of Userkaf, founder of the 5th Dynasty, the sun temples of Abusir (near Saqqara) were built. With the end of the 6th Dynasty royal power began to diminish, and there was a growing tendency toward independence.
Dynasties: Third, Fourth, Fifth, Sixth, Seventh, Eighth.
Photo: Statue of Khafre (left), Head of Userkaf (right)
Main Artefacts: Sedan chair of Queen Hetepheres, Meidum Geese, Statuette of Khufu, Statue of Khafre , Menkaure Triads, Statue of King Djoser, Statue of Ka-aper, Statue of Hetepdief, Head of Userkaf
2686 - 2160 BC 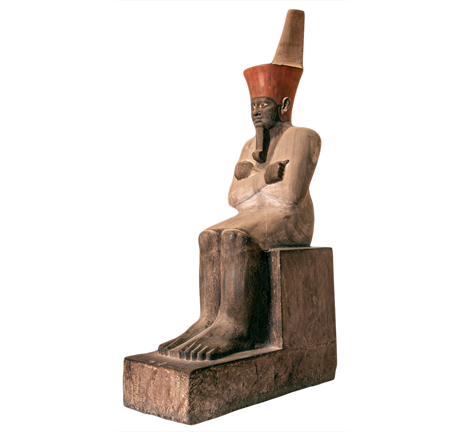 During the 11th Dynasty, a period of great prosperity began, and power was established once again by a dynasty of Theban princes. The king Mentuhotep reunites the country and builds a great funerary temple at Deir el Bahari. The kings Amenemhat I, Sesostris II, and Amenemhat II build their relatively small pyramids at el-Lisht, el-Lahun, and Hawara in Fayum.
Dynasties: Eleventh, Twelfth, Thirteen.
Photo: Statue of Mentuhotep II
2034 - after 1650 BC

Royal power declined again and Nubia became an independent state. The Hyksos, nomadic peoples of Palestinian origin, gained control of the northern part of Egypt, establishing their capital at Avaris in the Delta, and ruled the country.
Dynasties: Fourteenth, Fifteenth, Sixteenth, Seventeenth.
1773 - 1550 BC 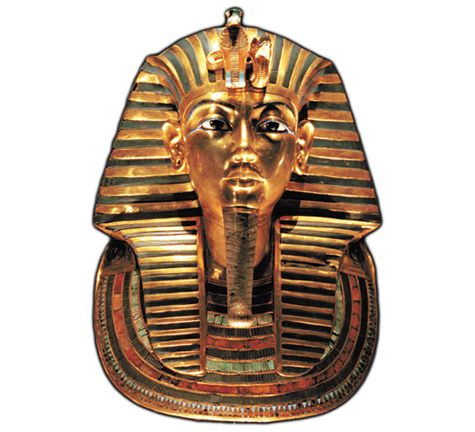 King Ahmose expelled the Hyksos and founded the 18th Dynasty. Thutmosis I conquered Upper Nubia. Queen Hatshepsut built the great funerary temple of Deir el Bahari at Thebes. Thutmosis III conquered Syria and extended his influence over the Near East. Amenhotep IV (Akhenaten) replaced the old religion with the worship of a single god, the sun disk, and moved his capital from Thebes to Tell el Amarna (Akhetaten). After his death, the new religion was abolished and Tutankhamun moved the capital to Memphis. Ramesses I founded the 19th Dynasty and Sethos I fought against the Libyans, the Syrians, and the Hittites. His son Ramesses II continued the war against the Hittites and after the battle of Qadesh, he made a peace treaty with them. The 19th Dynasty had ended with a short period of anarchy and with king Setnakhte begins the 20th Dynasty. His son, Ramesses III, fought against the Sea People, and was the last of the great pharaohs. After eight Ramessid rulers, with Ramesses XI the 20th Dynasty ends.
Dynasties: Eighteenth, Nineteenth, Twentieth
Photo: Mask of Tutankhamun
Main Artefacts: Colossal statuary group of Amenhotep III, Head of Hatshepsut, Statue of Ramesses II as a child and the god Horun, Statue of the Goddess Hathor with Amenhotep II, Unfinished head of Nefertiti
1550 - 1069 BC 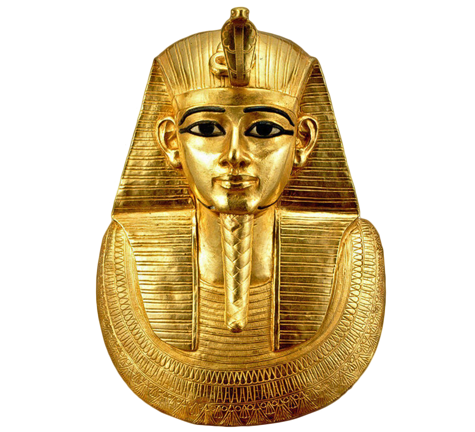 At Tanis, the royal residence in the Delta, a new Dynasty was founded that shared power with the High Priests at Thebes. Nubia became independent and Egypt lost control over Palestine. A number of kings of Libyan origins sprang up in the east of the Delta. Their power grew strong and they carried out buildings works at Tanis and Bubastis. Thebes declined in importance and Egypt was split up into numerous small states. Nubian rulers of the kingdom of Kush took control over Upper Egypt, conquering Memphis as well.
Dynasties: Twenty-first, Twenty-second, Twenty-third, Twenty-fourth, Twenty-fifth.
Photo: Funerary Mask of Psusennes I
1069 - 664 BC 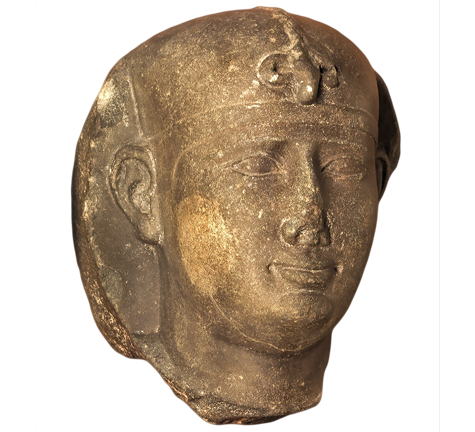 Despite continuous wars, this was a time of prosperity and cultural development. Following Nubian domination, Egypt fell briefly under Assyrian control. The Nubian kingdom of Kush was definitively separated from Egypt. In 525 BC, Psammetichus III was defeated by Cambyses the king of Persia, and Egypt became a Persian province. The 30th Dynasty was the last native Dynasty and King Nectanebo I built temples at Philae and a majestic pylon in front of the temple of Karnak. Nectanebo II, last pharaoh of the 30th Dynasty, was defeated by the combined Persian and Greek forces in the Battle of Pelusiun (343 BC). The Persians occupied Memphis and then seized the rest of Egypt.
Dynasties: Twenty-sixth, Twenty-seventh (Persian), Twenty-eighth, Twenty-ninth, Thirtieth.
Photo: Nectanebo II
664 - 332 BC 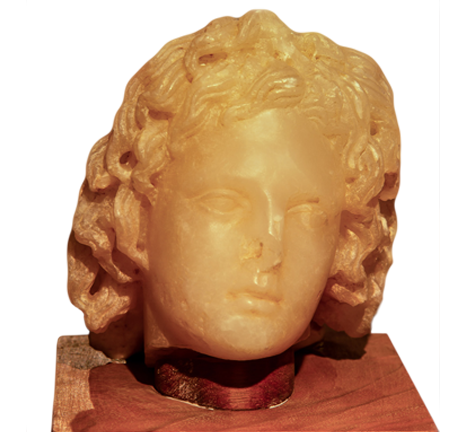 In 332 BC Alexander the Great occupied all of Egypt. After his death, the Macedonian general Ptolemy, Satrap of Egypt, had himself proclaimed pharaoh under the name of Ptolemy I. In 163 BC, Roman influence began to extend to Egypt. In 48 BC, Julius Caesar landed in Egypt to defend Cleopatra VII who had been deposed by her brother Ptolemy XIII. In 31 BC, Octavian, the first Roman emperor arrived in Egypt, conquered Alexandria, and Egypt became a Roman province.
Photo: Head of Alexander the Great
332 BC - 641 AD
Discover the Museum Collection